Quote: “Self Service Is The Best Service”.

“The first privately owned all “Digital Gurdwara” in the world, specially designed for the contribution of all the Sikh Ladies in the world. The Guru Granth Sahib (book format) has been replaced and is now displayed in ‘digital format on Smart TV’ and you are not required to follow any ‘reyat maryada (code)’ or get served by any priest (gyani) or are under any Act or any religious institutional regulations or any authority or police, no sacrilege (beadbi), no tearing, no touching, no money needed in your pocket (share donations of goods and materials only)”.

What Makes This Sikh Gurdwara Unique?

We are the assets of that One Invisible Creator Lord, who has created 8.4 million species on the planet, in various colors, habitat and nature. Only ‘mankind’ at the top of the ‘species ladder’ can through a True Guru’s divine knowledge & truth, realize and envision That Creator.

In previous Time Ages, the world has known divine knowledge through other Scripture, like the Vedas, Bible, Koran, Dharmpada, Shastras, Simitres, Upasinads, Gita, Purannas. The Guru Granth Sahib is the most upto date & purest, and in full revelation for all mankind.

Established in April 2011, this Sikh Gurdwara acknowledges the contribution of all and any Sikh Ladies through Time. They procreate a unique spiritual form that is without race, caste or color. This spiritual form leads one to meet, know and assimilate with The One Creator of All. 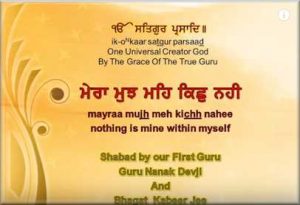 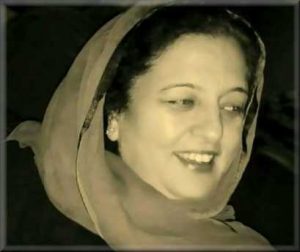 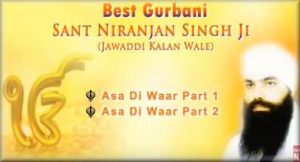 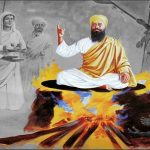 This Sikh Gurdwara was so named, after ‘a hukamnama’ (from the Guru Granth Sahib Ji was randomly opened on a page, where the Divine Hymn (shabad) – Guru Arjun Dev Ji) shown above was given to my late mother, Mrs. S V Panesar. This was taken in congregation, and it was her dream, to have a Gurdwara of her own, where she was born and so her son did that for her. Those who stood against this True Gurdwara will note, that nothing but nothing, can bring it down. Instead they will be destroyed through generations. I stand testament to this dictate of the True Guru. 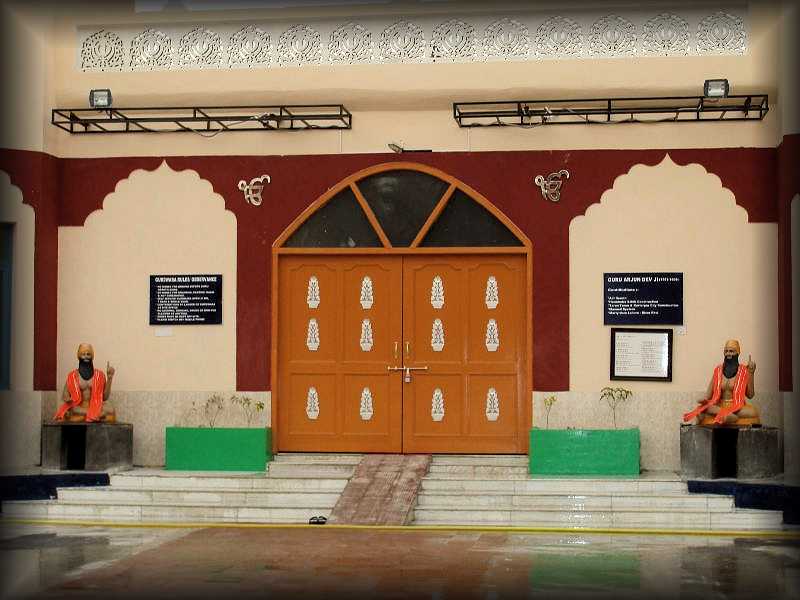 This photo gives you the visitor a ‘true life photo’ on completion of the Gurdwara. Notice the two beautiful Guru Arjun Dev Ji statues placed outside the Gurdwara. This was never against any dictate, as other Gurdwaras in the State like ‘Mediana & Harike’ nearest have such figurines outside. Many other places of worship attract visitors to their ‘holy places’ using such figurines, but these outside the Gurdwara, were forcefully removed and destroyed. As they have sown seeds, so will they eat poison and destroy themselves!

The Divine Hymn Outside

This divine hymn proclaims that s Guru’s Sikh doing service to statues, stone gods or any other figurines in material format, will gain you ‘nothing’. That service is fruitless and a waste of time. So, I built these statues and placed this divine hymn above, for all the visitors and especially the school children to learn this Truth. It was destroyed without justification, order of law or any other dictate. 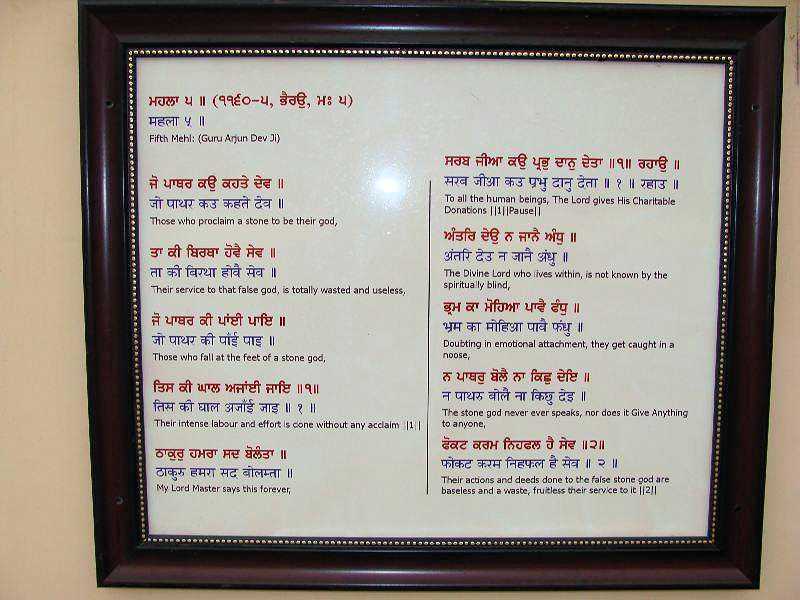 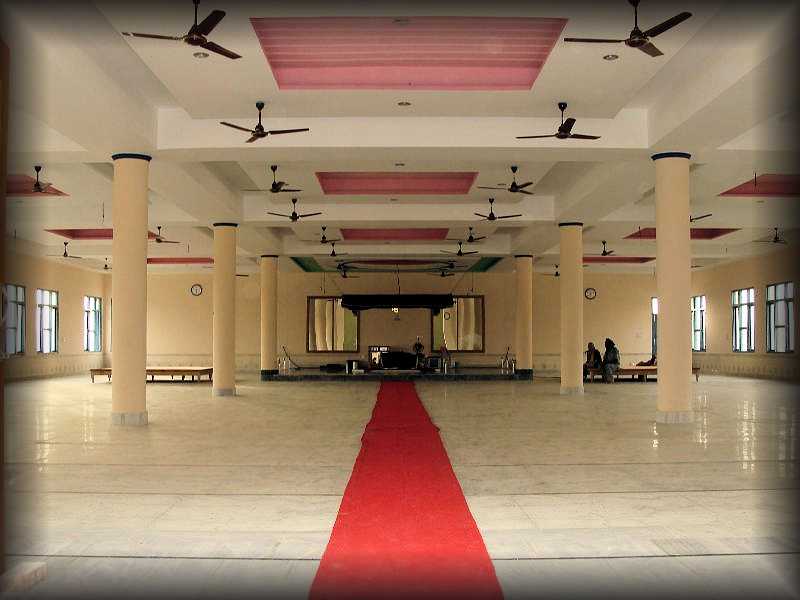 This was the original Gurdwara view opening the front gates. The Gurdwara hall is 80ft x 100ft and took over 3 years to build at a cost of around 1.5Cr. The amount of labor needed to make such a construction was hardly 5 at any one time. Most of the labor came from the state of Bihar and stayed onsite to finish the project.

May & June  2011, the Gurdwara was raided and destroyed. The Guru Granth given to parents by my grand father stolen and sold. If this isn’t is the highest sacrilege, theft and criminality on someone’s personal land & property, without the owner’s presence on site, then what is Criminal? Who are responsible for this ‘Destructive Act’ will lose all their next 21 generations to such destruction. The Guru’s House was created with the Eternal Guru Granth Sahib present & resident, it is then The Guru’s House. Not anyone on the planet has the right by Law or Otherwise to destroy it.

Bhai Gurdas,was born at Goindwal between 1543-553AD, son of Datar Chand the younger brother of Guru Amardas. On the death of Guru Ramdas, he returned to Amritsar and presented himself before Guru Arjan. He became his scribe and wrote the Guru Granth Sahib. The compilation of Guru Granth Sahib was completed in 1604. It took almost 11 years to complete this task. Sometime later, Bhai Gurdas wrote the 40 Vaaran, these were the ‘kunji’ or key to knowing the Guru Granth Sahib which is locked.  In the 1st Var, the last Pauri 49, Bhai Gurdas brought divine knowledge of a ‘unique mantra’ which when recited in mind continuously in Time brings one to unite with The Lord. This precious gift is for those who haven’t had the good fortune to have the True Name given to them in the destiny of their human life. It updates all other ‘mantras’ which emanated from Vishnu, Har Krishan and Ram in three previous Time ages of Satyug, Treta, Duapar. In Kalyug now this is the divine mantra to recite with every breath of life, direct to The One Unseen Lord. 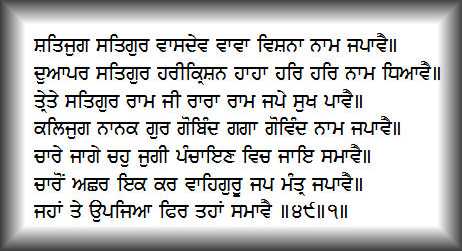